John Urquhart found his love for nature as a child, mucking about in the wetlands and forests of Northumberland County. He is the owner and Principal Ecologist at Blazing Star Environmental. He founded the company in 2015 to support all individuals, organizations and governments that are trying to ensure that sustaining a healthy environment is part of all aspects of growth in Ontario. Before Blazing Star Environmental, John worked for nearly 6 years as an ecologist and land manager at Ontario Nature where he managed their nature reserve system and their Citizen Science program. John completed two degrees at the University of Guelph: an Honours B.Env.Sc. in Ecology and a M.Sc. degree in Zoology.

John has been an Occasional Teacher with the Durham District School Board for several years. He teaches French Immersion to students in the Primary and Junior Divisions. He has diplomas in Landscape Technology from Humber College. He obtained his Biology and Education degrees from Lakehead University. Currently he is the Vice-President of the Pickering Naturalists. He is an active Director at Large on the South Shore Joint Initiative (SSJI) and Tallgrass Ontario (TGO). He is the current editor of the SSJI  newsletter The South Shoreliner. He is a member of the TGO Rice Lake Plains Committee. He writes articles for newsletters and does inventories of Birds and Plants with various BioBlitzes. He enjoys doing photography, sketching, painting and birding.

Karen is a Senior Manager at the Toronto and Region Conservation Authority. She works with a dynamic team overseeing ecological restoration projects in the Toronto area, including invasive plant management.  Karen is a contributing author for the City of Toronto Biodiversity series and is on the Bird Studies Canada board of directors.  She is a former councillor with the Toronto Ornithological Club, and past chair of the Durham Environmental Advisory Committee.  Karen is a self-described native plant champion.

Mhairi McFarlane grew up in Scotland, where she completed an Honours Ecology degree from the University of Stirling. She then completed her PhD in Ecology from the University of Exeter in Cornwall. Her thesis was on the behavioural ecology of Cape Sugarbirds in South Africa. She moved to Ontario in 2006, and had short contracts with the Ministry of Natural Resources and Bird Studies Canada before joining the Nature Conservancy of Canada in March 2008. She worked as the Conservation Biologist for southwestern Ontario before becoming the Conservation Science Manager for Ontario in September 2014.

Jon L. Peter has diplomas in horticulture from the University of Guelph and from the prestigious Niagara Parks Commission School of Horticulture. Jon has worked at some of the finest botanical institutions in North America, including the Arnold Arboretum, The Morton Arboretum & the New York Botanical Garden. Jon is currently Curator & Manager of Plant Records at the Royal Botanical Gardens, Ontario.

Iola Price is a retired biologist.  She started her career as a wildlife biologist with the Canadian Wildlife Service, initially working on contaminant effects on fish-eating birds on the Great Lakes.  Other exciting parts of her work included hacking Peregrine Falcons in an urban setting, being responsible for national coordination of programs on endangered species and transboundary wildlife and the CWS Latin American Program of contact and joint research with countries in Latin America.

She moved to the Department of Fisheries and Oceans as the Director, Aquaculture and Oceans Science.  She co-chaired the fed.-prov. committee writing the National Code on Introduction and Transfer of Aquatic Organisms and at various times was responsible for national coordination of programs on biological and physical oceanography and impact of changes in the oceans on fish populations; habitat science and acid rain impacts on fish populations; salmonid and new species aquaculture research; and, Canada’s fish health program.

Her volunteer work has included being a member and then chair of the Ottawa Forests and Greenspace Advisory Committee (reporting to Ottawa City Council) 2001-2007 advising on urban and rural tree and forestry issues, wetlands protection etc. and was the President of the OIPC from 2014 to 2019.   She hosts the annual informal meeting of the Ottawa-Area Invasive Plant Group and just loves to pull buckthorn, garlic mustard and dog-strangling vine.

Dr. Sandy Smith is a Professor in the Institute of Forestry & Conservation at the John H Daniels Faculty, University of Toronto. She specializes in forest health, urban forestry, and is a leading expert in the ecology and biological management of invasive forest species with 150+ articles and chapters in this area. Her research addresses ecosystem resilience and the natural control of forest pest species, including invasive insects, earthworms, and plants. Sandy has served as a reviewer for international journals and on national (NSERC) and provincial scientific panels for managing invasive insects. She has taught in 30+ university and professional courses, supervised over 65 student theses, and has held a number of positions including Minjiang Scholar (China), Fellow of the Royal Entomological Society (UK), Past-President of the Canadian and Ontario Entomological Societies, strategic advisor to LEAF (Local Enhancement & Appreciation of Forests) and Ontario’s Invasive Species Centre, as well as on the boards of the Ontario Forestry Futures Committee and Tree Canada.

Ken Towle has over twenty-five years of professional experience in conservation biology, restoration ecology and environmental education.  In 1990 he received a Masters degree in Environmental Studies from York University.  Since then he has worked on such diverse issues as tropical forest conservation, migratory songbird declines, tallgrass prairie restoration, and natural heritage system design.  Ken’s work with invasive plants began in the early 90s when he was confronted with dog-strangling vine while involved in restoration projects in Toronto’s Don River valley.  Later he produced an educational booklet profiling major invasive plants in Ontario and participated in the Ontario Invasive Plants Working Group.  Following five years with the Toronto and Region Conservation Authority he moved to the Ganaraska Region Conservation Authority in 2003. He retired in 2018.  He now represents the Society for Ecological Restoration Ontario (SERO) and has previously represented Conservation Ontario on the OIPC Board of Directors. Ken is also the former Vice-President of the OIPC.

Cara Webster represents the City of Toronto Urban Forestry Branch as the Supervisor of the Natural Resource Management Unit.  She has worked for the City of Toronto for 20 years overseeing staff, volunteer programs and contracted services to implement tree planting, restoration and invasive plant control projects. The Natural Resource Management unit has developed expertise in chemical and physical control methods of invasive plants and management of oak savannah habitat.  Cara is a past graduate of the University of Toronto (Zoology BSc) and the Niagara College Ecosystem Restoration Post-Graduate Diploma.’

Brandon is currently a Land Management Technician at the Upper Thames River Conservation Authority. He is an Associate R.P.F. and ISA Arborist who has over 20 years experience in tree risk assessment, ecological restoration including invasive species management, forest health and forest management. At the UTRCA he is responsible for managing 12 of London’s Environmentally Significant Areas including all aspects of trail management, invasive species/ecological restoration, education, encroachment and enforcement. Brandon is actively involved as a member of the OPFA Private Land Forestry Working Group, OPFA Complaints Committee, Forest Gene Conservation Association (FGCA) Species Conservation Committee, and the UTRCA representative on the City of London Trees and Forests Advisory Committee, not to mention several UTRCA committees/teams. When not working Brandon can be found on a sports field or arena with his 2 kids, or canoeing and camping throughout Ontario.

John was a dairy farmer until 1988. In 1988, he then became the Wellington County Weed Inspector and Tree Bylaw Officer. He also delivered the Environmental Farm Plan in Wellington County for several years. After being the President of the Ontario Soil and Crop Improvement Association, he was elected to the Ontario Agricultural Hall of  Fame. John was significantly involved on the planning committee for the establishment of the OIPC and continues to offer his assistance and expertise.

Paula is a graduate of the School of Landscape Architecture at the University of Guelph and has been a licensed Landscape Architect since 1993. She is presently the Principal Landscape Architect at the Ministry of Transportation and oversees all aspects of design, planting and specifications for work along the provincial highways. In this role she is involved in the development of plant and seed lists and assists with project oversight and maintenance requirements dealing with invasive plants.  Prior to working for the MTO, she worked on a variety of private consulting projects including the design of cemeteries, parks, streetscape and tourist developments. Between 1996 and 2007 Paul taught landscape design and estimating at Niagara College and Niagara Parks.

Kristen has a master’s degree in weed science from the University of Manitoba and an honors bachelor of science degree in agriculture from the University of Guelph. As OMAFRA’s Weed Management Specialist for Horticulture crops, she leads the development, coordination and implementation of programs related to weed management issues in Ontario. Kristen is a past recipient of the Deputy Minister’s Award for her work as a provincial vegetable specialist and the recent recipient of the Excellence in Weed Science Extension Award from the Canadian Weed Science Society (CWSS) for her current work.  Kristen previously spent several years with the Ontario Greenhouse Vegetable Growers and in the private sector coordinating research trials in support of new product registrations.

Prabir has been an Ecosystem Scientist working for Parks Canada since 2007. He completed his Ph.D. (2002) in the field of biology from Dalhousie University and postdoctoral studies at Cornell University. At Parks Canada, his current interests concentrate on forecasting ecological change, the important of invasive species and habitat restoration. He’s published more than 20 scientific articles in peer reviewed journals.

Owen worked for MNRF for over 35 years as a wildlife biologist, communicator and public stewardship engagement coordinator.  In 2009 he continued on into retirement helping to lead the OIPC (from its inception to now) and on the Board of the Carolinian Canada Coalition (since May 2013). His contract work has broadened in recent years to include photography and his retirement commitment has increased to enjoying more time outdoors. 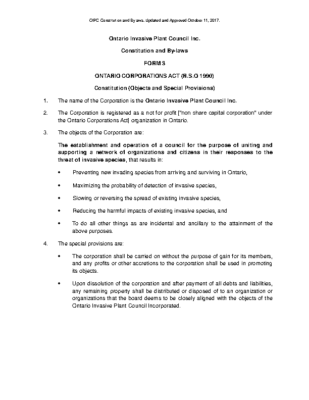 We are a multi-sector, non-profit group committed to the collaboration of organizations and citizens in order to effectively respond to the threat of invasive plants in Ontario.